An Evening With Stacey Abrams to celebrate the paperback launch of the New York Times bestseller Our Time Is Now. Abrams will be joined by Cari Champion on Zoom Webinar to discuss the urgency of ending voter suppression and how we can empower citizens to use their power to shape the future. The conversation will be followed by moderated audience Q&A.

Abrams is the New York Times bestselling author of Lead from the Outside, a serial entrepreneur nonprofit CEO, and political leader. A tax attorney by training, she served eleven years in the Georgia House of Representatives, seven as Minority Leader, and Abrams became the 2018 Democratic nominee for Governor of Georgia, where she won more votes than any other Democrat in the state’s history.

Click here for your tickets to this virtual event

Jesse Hagopian, Loretta Ross, and Tim Wise as they examine Behind the Attacks on “Critical Race Theory” and How We Can Respond.

Attempts to censor discussions of race and racism are underway nationwide. GOP lawmakers in at least 21 states are either introducing legislation or have already passed bans that impact K-12 classrooms and in some cases, colleges and universities. At the federal level, 30 House Republicans signed on to bills that would prohibit diversity and anti-racism training in the military and federal agencies.

Critical race theory (CRT) is becoming the flashpoint in this debate over how U.S. history and racism can be addressed in classrooms, government agencies, trainings, and conferences. CRT examines the ways institutionalized racism and other systemic barriers to equality are embedded in U.S. society and how institutional and systemic inequities disproportionately affect people of color. But for opponents, it is a catch-all threat to white people, lumping together multiculturalism, anti-racism, identity politics, diversity, equity, and inclusion efforts, and racial justice education.Hagopian is one of the acclaimed educators in the Black Lives Matter at School movement, author and editor for Rethinking Schools magazine, Ethnic Studies teacher at Seattle’s Garfield High School and a leader in the national effort calling on educators to pledge to teach the truth in the face of these bans

Ross is a nationally-recognized expert on racism and racial justice, author of the forthcoming, Calling In the Calling Out Culture, and professor at Smith College (Northampton, MA) in the Program for the Study of Women and Gender, teaching courses on white supremacy, race and culture in America, human rights, and calling in call out culture

Wise is one of the country’s leading anti-racist educators and trainers on methods for dismantling racial inequity in institutions, a political commentator, and author of nine books including his latest, Dispatches from the Race War , and the acclaimed memoir, White Like Me: Reflections on Race from a Privileged Son.

A Brief History of Gay Pride

In June of 1969, a group of LGBTQ+ people in New York City rioted following a police raid of the Stonewall Inn, a gay bar located on Christopher Street in Greenwich Village. This series of events was a turning point for the LGBTQ+ community and marks one of the most significant events leading to the modern gay rights movement. The following year in June, organized demonstrations took place in New York City, Los Angeles and San Francisco to mark the one-year anniversary of the Stonewall Riots. As the years went on, additional cities in North America and Europe began to hold their own public demonstrations or pride day, eventually leading to what we know today as a gay pride parade, march, celebration or festival.

Visit Hollaback to check out their free Bystander Intervention and De-escalation trainings! 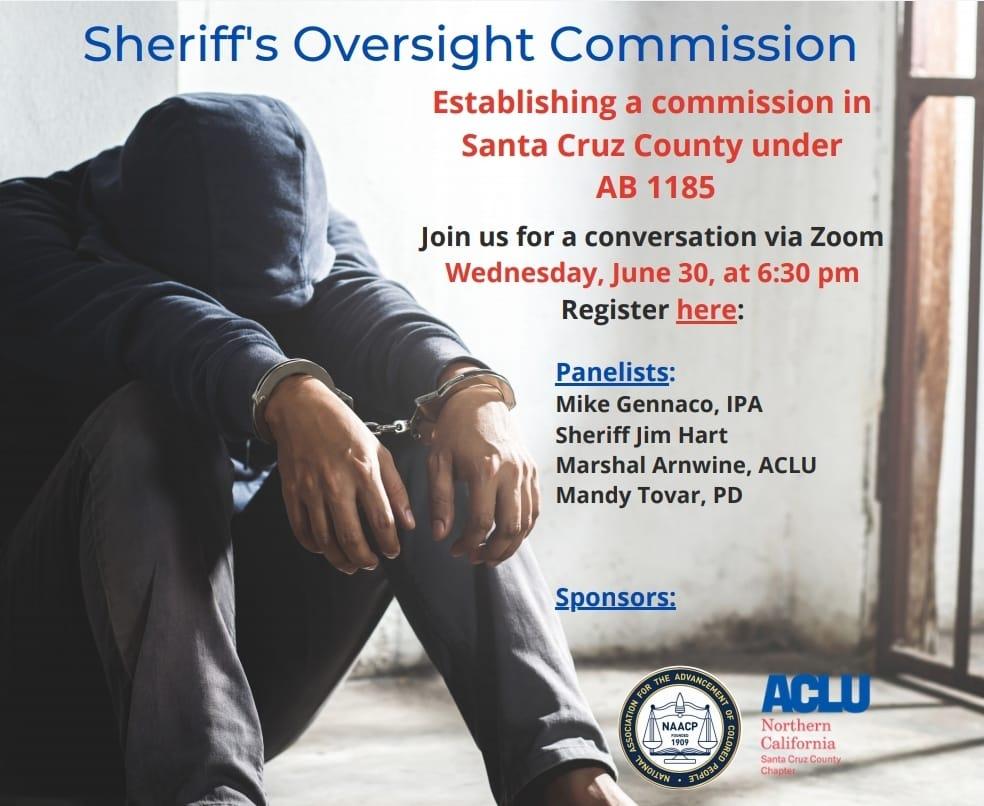 Join NAACP Santa Cruz County and ACLU of Northern California for a conversation on establishing a Sheriff’s commission in our county.

Sheriffs in California possess extraordinary powers, not only as law enforcement officers but also as the keepers of the jail and in many other public functions that are not presently subject to public oversight or accountability. The Sheriff in Santa Cruz County presently operates on an approximately $90 million budget per year, which constitutes about a quarter of the entire county budget.

AB1185 is a new California law that authorizes every county in California to form a commission to provide public oversight of the Sheriff’s department, the most powerful law enforcement agency in our county.  Join us for a discussion on the need for such a commission in Santa Cruz County and hear from various stakeholders — from the Sheriff himself, to families and professionals that have been impacted by Sheriff practices and policies.  We will discuss all aspects of this commission and of the Office of the Inspector General it empowers.

Join us on zoom to meet like-minded community members and spend some time taking action together. Please join if you can! All are welcome!

This is a fantastic opportunity to connect with others who are feeling rage and deep sadness about racism and white supremacy, but not sure what to do. Join SURJ for an hour of action! We’ll meet over Zoom to provide concrete steps you can take—calling elected officials, signing petitions, etc.—to combat racism against Black & Indigenous people and communities of color.  (Closed captioning will be available in the main room of Action Hour calls.) https://www.surjbayarea.org/events